Boris Uan-Zo-li, Russian born artist, immigrated to the US in 2011, and currently resides in Oregon. Boris’s style of paintings is highly original due to his unique use of colors and images. His paintings are now privately owned in Germany, Switzerland, France and the United States.

Boris Uan-Zo-li was born in Moscow, Russia, right before the WW2. His ancestry is rather unique – he is 1/4 Chinese, 1/4 Cossack and 1/2 Jewish. His mother was half-Cossack and half-Chinese. His Chinese grandfather Wang Zo Li came to Russia in 1904. After the communist revolution Zo Li Wang adopted the Russian first name, but decided to keep his Chinese name. When a Russian bureaucrat was recording his name, he made a spelling error, and the last name became Uan-Zo-li. This mistake spawned the whole generation of Uan-Zo-li’s.

Boris’s father, Lazar Goyhman was a Jew from a famous town of Odessa, and he worked as a civil engineer. In 1953 he was arrested and accused of “zionism”. During the court proceedings, KGB played the recording of Lazar Goyhman telling his “friend” (who later was revealed as a KGB undercover agent) that he would walk to Israel on foot if he could. Lazar was sent to Stalin’s forced labor camps, but luckily he survived and was released in 1956, and later the Soviet regime conceded that he was not guilty of any crimes.

In 1954, Boris’s mother bribed the passport organization and changed his name from Goyhman (a Jewish last name) to Uan-Zo-li in order to protect him from the anti-semitic prosecution and make it easier for him to be admitted to college.

Boris graduated from the Moscow Power Institute in 1961. His diploma work (equivalent to the US Master’s degree) was so original, that he was awarded two patents for it.

He was employed as an electronics engineer for 30 years and during his career authored 165 patents. He designed power supplies for Soviet Aero and Space industry and was one of the leading engineer in the field.

In spite of his evident engineering talents, Boris always felt a strong desire to paint. While continuing to work as an engineer, he enrolled in the Moscow Polygraphic Institute and graduated with a Master’s Degree in Book Illustrations. Working during the day as an electrical engineer, he would spend nights and weekends perfecting his paintings, and developed a unique style, later referred by his friends half-jokingly as “Uan-Zo-lism”.

During the Soviet times, Boris participated in four exhibitions. During one of the exhibitions a soviet bureaucrat withdrew his paintings at the last moment because they “did not fit the communist vision” – while his name was still mentioned in the catalogue. After the fall of communism, Boris’s paintings were shown in a number of exhibitions, including the “Central House of Artists”, one of the most prestigious Russian centers of art. Boris’s paintings are now privately owned in Germany, Switzerland, France and the United States.

In 2011, he immigrated to the United States, and currently resides in Oregon. He brought with him more than 300 paintings. Boris is not exhibiting his works in Russia because his style drastically differs from the art which is popular there now. He believes that American art market is much more welcoming to his unique style, and he intends to promote his paintings in the US. 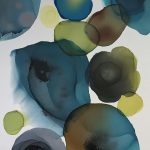